Bernie Sanders is slowly gaining ground on Hillary Clinton in the race to become the Democratic nominee, but he has little support among non-white Democrats

Vermont Senator Bernie Sanders has been gaining support among registered voters who call themselves Democrats – though he still trails Hillary Clinton by 21 points in the latest Economist/YouGov Poll.  But the margin has narrowed nine points in the last two weeks.  Two weeks ago, the gap was 30 points.  Clinton’s leading opposition appears to be Sanders, but it may actually be Clinton herself. 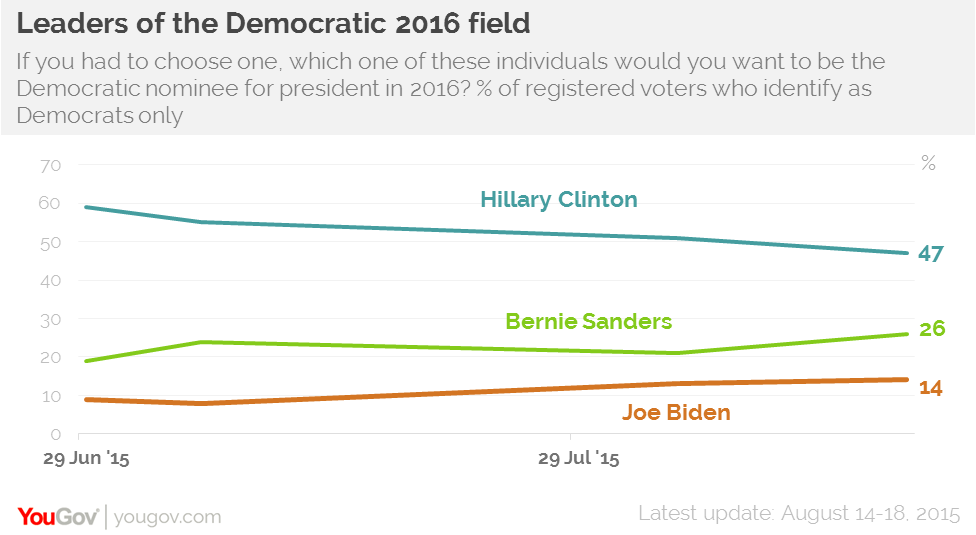 Clinton’s support dropped below 50% for the first time in this poll.  Vice President Joe Biden is third.  The other announced candidates have so far managed little support.

Sanders’ support has limitations, most especially when it comes to minorities.  This Economist/YouGov Poll includes twice as many respondents as most polls, allowing the division of Democrats into a number of subgroups.  Although white Democrats divide evenly between Clinton and Sanders, the Vermont Democrat receives almost no minority support: only 13% of Hispanic Democrats and 4% of blacks say he is their preferred nominee. 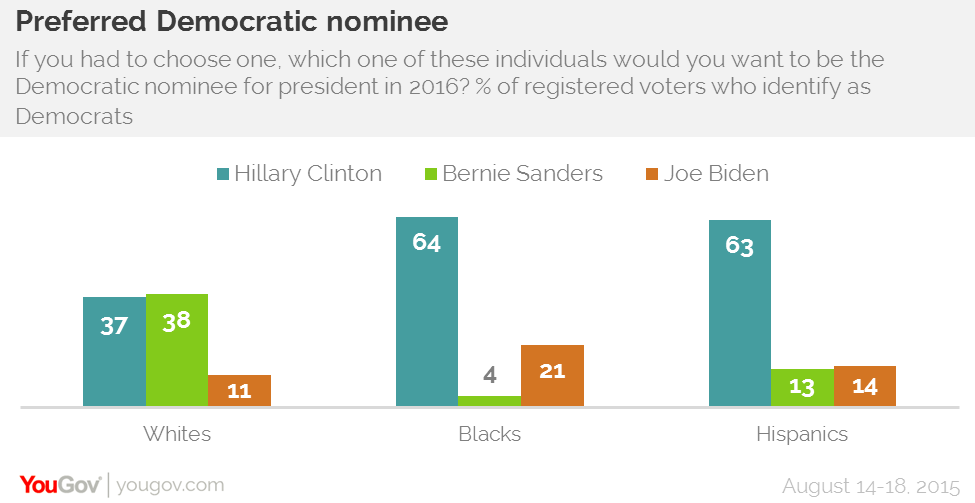 Sanders also runs even with Clinton among Democrats under the age of 30.  There was almost no difference in the preferences of men and women.

Surprisingly perhaps, liberals, who make up more than half of all registered voters who call themselves Democrats, are as likely to support Clinton (44%) as support Sanders (39%).  Moderate Democrats favor Clinton 51% to 22%.

Although Democrats overall think more highly of Clinton than they do of Sanders, those assessments have changed slightly recently.  In this week’s poll, 76% of Democrats give Clinton a favorable rating, down from 82% two weeks ago.  In the same period, favorable assessments of Sanders have improved by seven points. 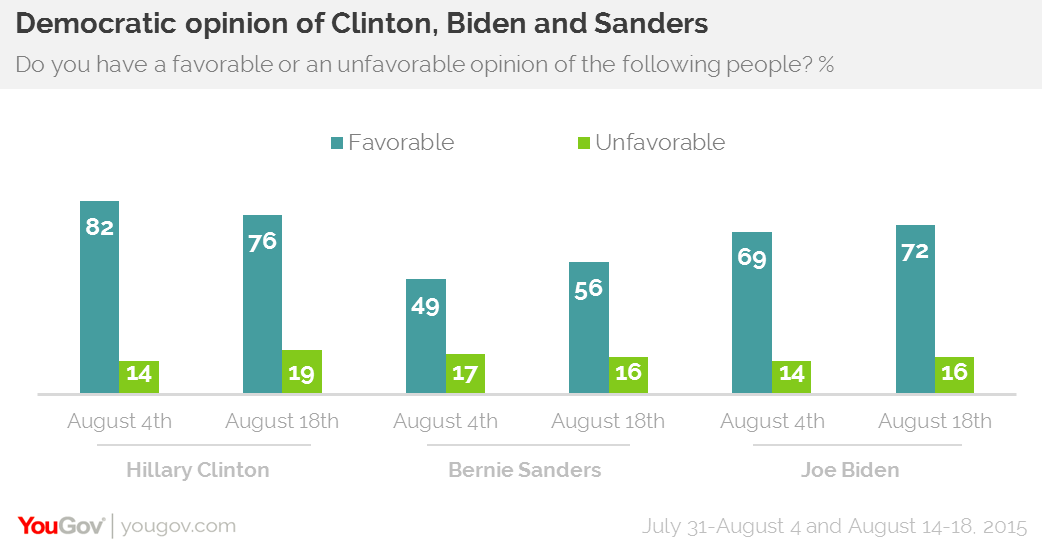 Vice President Joe Biden, still mulling over the possibility of making a run for the Democratic nomination, is very well-liked by Democrats.   One in three Democrats say they would like to have more candidates in the race – something especially true for those who favor Biden for the nomination.

Although Clinton may have lost some support recently, even those Democrats who support Sanders and Biden like the former Secretary of State.  Although one in three of them say their opinion of Clinton is unfavorable, twice as many are favorable.   And more than twice as many Biden and Sanders supporters say Clinton is their second choice for the nomination than choose her other principle opponent.

Clinton’s own supporters are twice as likely to say that Biden is their second choice as they are to give Sanders their nod.

Clinton’s biggest challenge might be herself.  While perceptions of her honesty have never been high, the share of Americans – and Democrats – who see her as honest and trustworthy has continued to drop, even from just a few months ago. 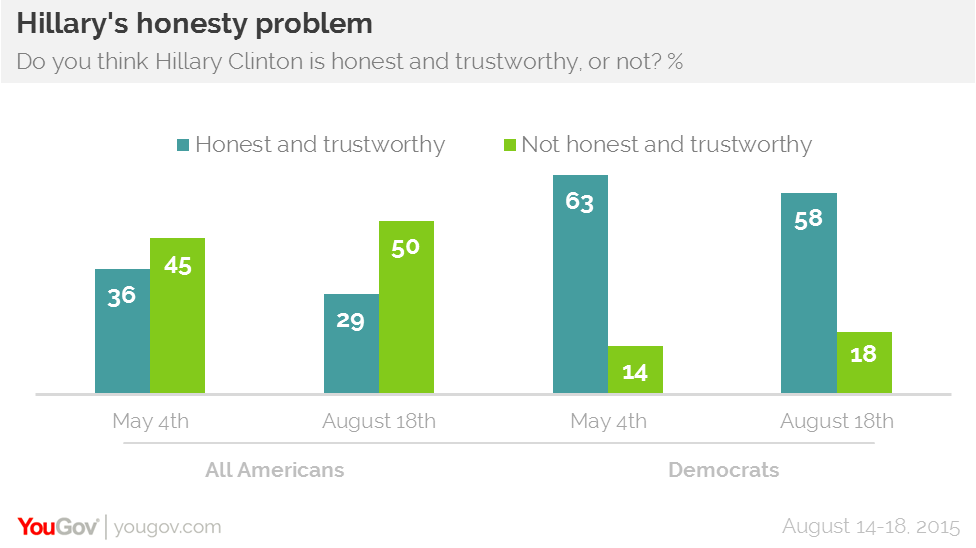 Moat Americans say they have followed the news about Clinton’s use of a private server for State Department business – and 60% view that as at least a somewhat serious problem.  Democrats are less likely to think that – instead, 66% of Democrats believe that the news media is making too big a deal out of the emails. 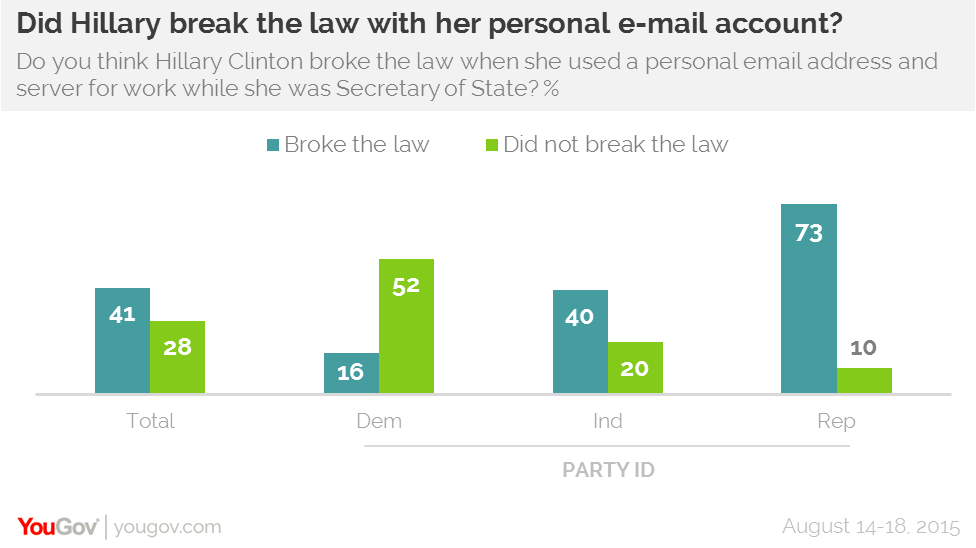 What Clinton retains, however, is the public’s belief that she will win, a belief even shared by many outside of her own party.  Two out of three Democrats, more than the number who make her their first choice, believe she will win the nomination.

When it comes to next fall’s election, nearly nine out of ten Democrats believe that if Clinton is nominated, she can win the presidency, more than think that about Biden or Sanders. 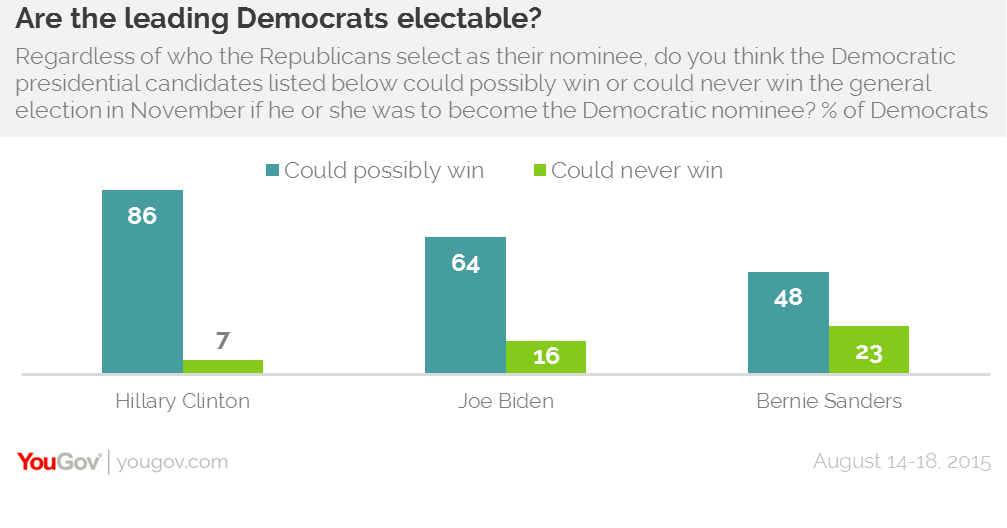 In fact, among the overall public, more see Clinton as a possible victor than think that about any other current candidate – Republican or Democrat.