In the week that followed last Friday’s atrocities in Paris the world came closer to forming a unified front against ISIS in Syria, France tripled its air strike capacity in the region and seven out of eight of the known perpetrators either died or were killed, in addition to the suspected ringleader. French police have issued an international arrest warrant for Belgian-born French national Salah Abdeslam, the remaining known terrorist involved in the Paris attacks, who is believed to be in Brussels – now in lockdown to expedite his arrest and to protect citizens from the threat of an imminent terrorist event involving firearms and explosives.

YouGov France’s first set of results in the wake of the Paris terror attacks reveals strong support for intensifying French air strikes on ISIS in Syria, in defiance of the terrorist group’s claims that military intervention was the reason for the attacks.

Fully 75% of French people either strongly (58%) or slightly (17%) favour intensifying air strikes on ISIS in Syria (8% oppose) and 47% favour sending French troops to fight ISIS on the ground in Syria (28% oppose).

Asked which is more needed out of economic sanctions and diplomacy or military offensives, the largest group (48%) say both are equally important but an emphasis on military intervention outweighs prioritising diplomacy (28% to 11%).

Critics of government surveillance voiced their concern this week that data collection measures would be rushed through while citizens were fearful of Paris-style attacks. In Britain, prior to the attacks, 63% said they would support intelligence agencies having wide-ranging access to the message and call metadata and internet browsing history of every citizen for a year if the permission of a judge was required. In France, after the attacks, 69% say they are ready to have their freedoms reduced if it can benefit the public interest.

More regulation and control of the internet is seen as one of the most effective ways to fight ISIS domestically in France, chosen by 62% as effective. Strengthening wiretaps on terrorist suspects (72%); increasing control at Europe’s borders (70%) and at mosques (68%); restoring long-term control of France’s border (62%); and placing all terrorist suspects under house arrest (61%) are also seen as highly effective measures. 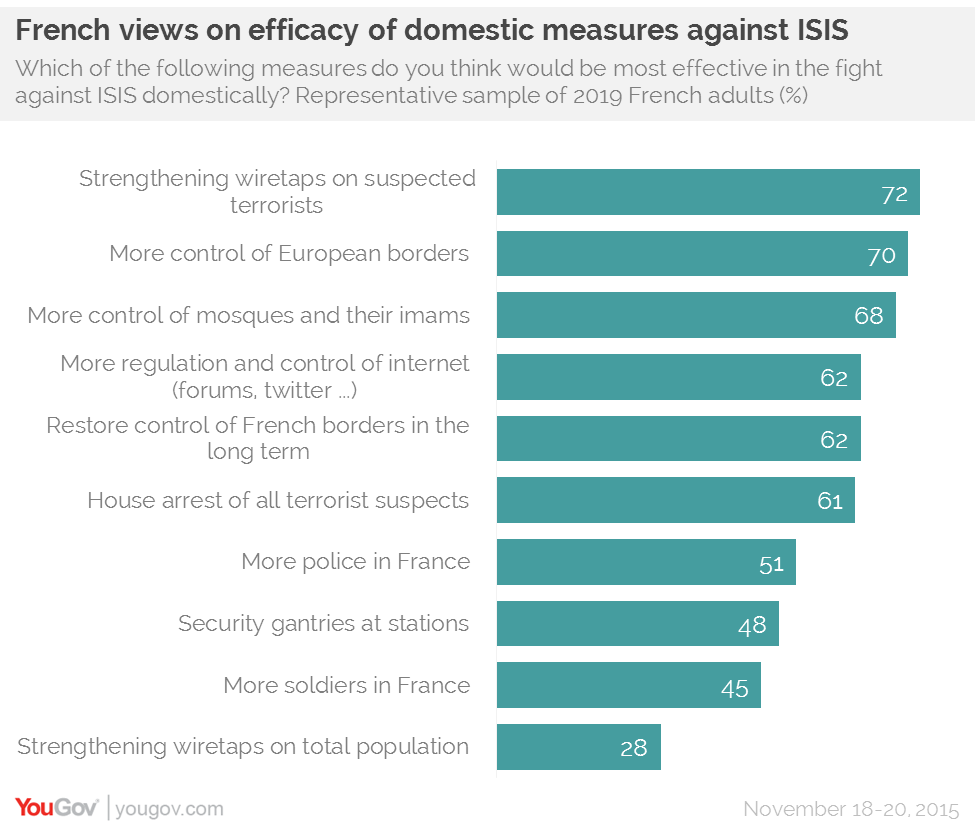 A second wave of French polling now currently in field by YouGov has repeated questions asked in September on favourability towards France permitting migrants and refugees from various settings and for different reasons to settle there.

David Cameron is to meet with French President Francois Hollande in Paris on Monday to discuss how best to coordinate counter-terrorist offensives against ISIS in Syria and Iraq, ahead of setting out his plan for British strategy next week. The Prime Minister is said to be building support for RAF air strikes on ISIS in Syria, amid rumours he has insufficient support for a Commons vote on the issue. Some Labour shadow ministers are reportedly willing to support Mr Cameron over their own leaders' scepticism of military intervention, however.