The Vermont senator is now seen as 'electable' by a majority of Americans, while Hillary Clinton's lead among likely Democratic voters has narrowed to 9 points

Vermont Senator Bernie Sanders has seen a rise in his Iowa and New Hampshire poll numbers – and with the Iowa caucuses less than two weeks away, his national support is growing, too.  In the latest Economist/YouGov Poll, he trails national frontrunner Hillary Clinton by just nine points among likely Democratic primary voters – the closest margin yet. 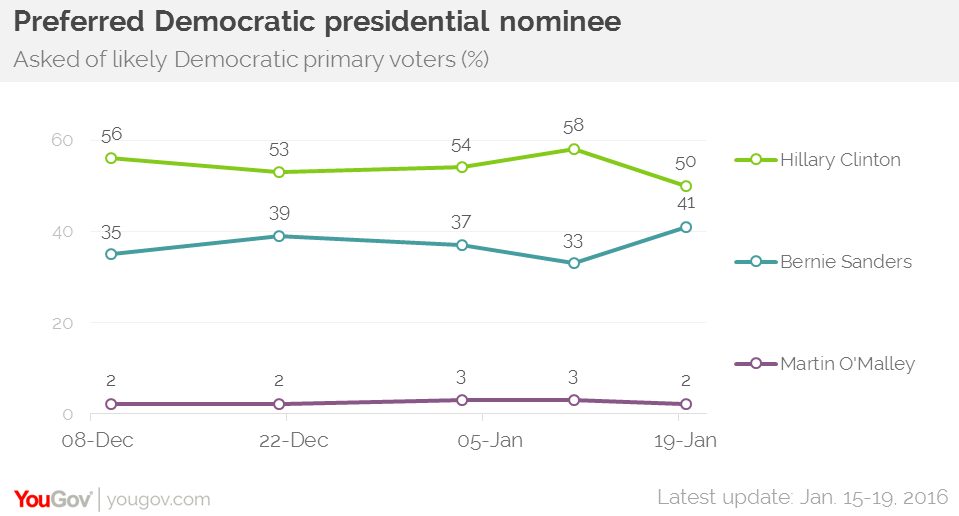 Sanders has always been well-liked, compared with Clinton. This poll is no exception. More than half the overall public has an unfavorable view of Clinton, and that has been true in the poll for a while. 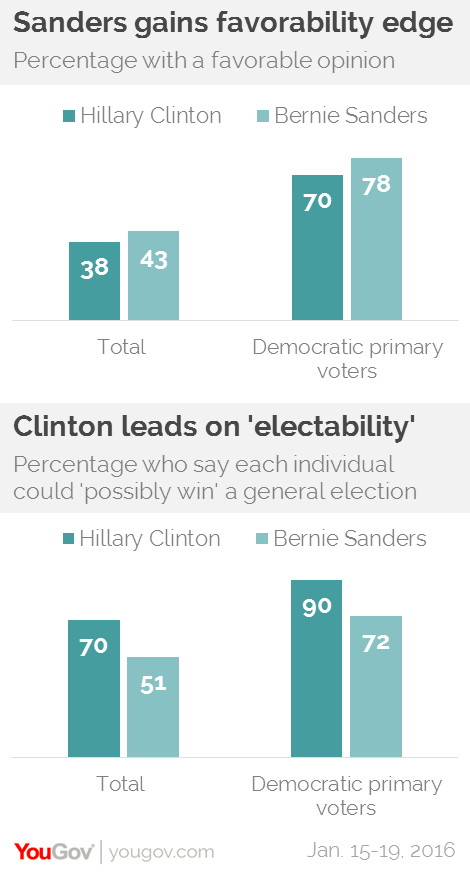 As for Sanders, among the public overall more are favorable than are unfavorable – something that cannot be said of any of the other candidates, Democrat or Republican. Among Democratic primary voters, while 70% have a favorable opinion of Clinton, even more – 78% – have a favorable view of Sanders.

Sanders’s gains on the former Secretary of State in voter preference is accompanied by a gain in his credibility among Democratic voters and the public overall. 51% the public believes Sanders could win the general election if the Democrats nominate him, his highest rating yet in YouGov's polling. Nearly three-quarters of Democratic voters agree.

However, Clinton continues to be perceived as the most electable Democratic – or Republican – candidate.

In fact, except for many who expect a Sanders victory in Vermont’s neighboring New Hampshire, Clinton is seen as the likely winner in Iowa and is expected to win the Democratic nomination, by nearly three to one over Sanders.

The total sample in this Economist/YouGov Poll is 2,000, allowing for more analysis of groups of Democratic voters. Sanders’ improved showing against Clinton in Democratic support comes in part because of his strong support from political independents, and from voters under 30.  But it is unclear how many in those groups will turn out for primaries or caucuses. Among Democratic identifiers likely to vote in Democratic primaries, Clinton leads Sanders by 21 points. She is also comfortably ahead with older voters and with African-Americans.

This poll shows a gender gap, too. Clinton barely edges Sanders with men who say they will vote in the Democratic primary, leading him with that group by only three points. But she holds a 15-point lead with women.