Ted Cruz comes second in every state except Texas, where he is 15 points ahead of Donald Trump

With just over a week until the Iowa Caucuses, national frontrunner Donald Trump has retaken the lead in Iowa and held onto wide leads in New Hampshire and South Carolina, according to the latest wave of the 2016 YouGov/CBS News Battleground Tracker. Trump is ahead by double-digits in two states polled for the first time in the series, Florida and Georgia, while Ted Cruz has the advantage in his home state of Texas. 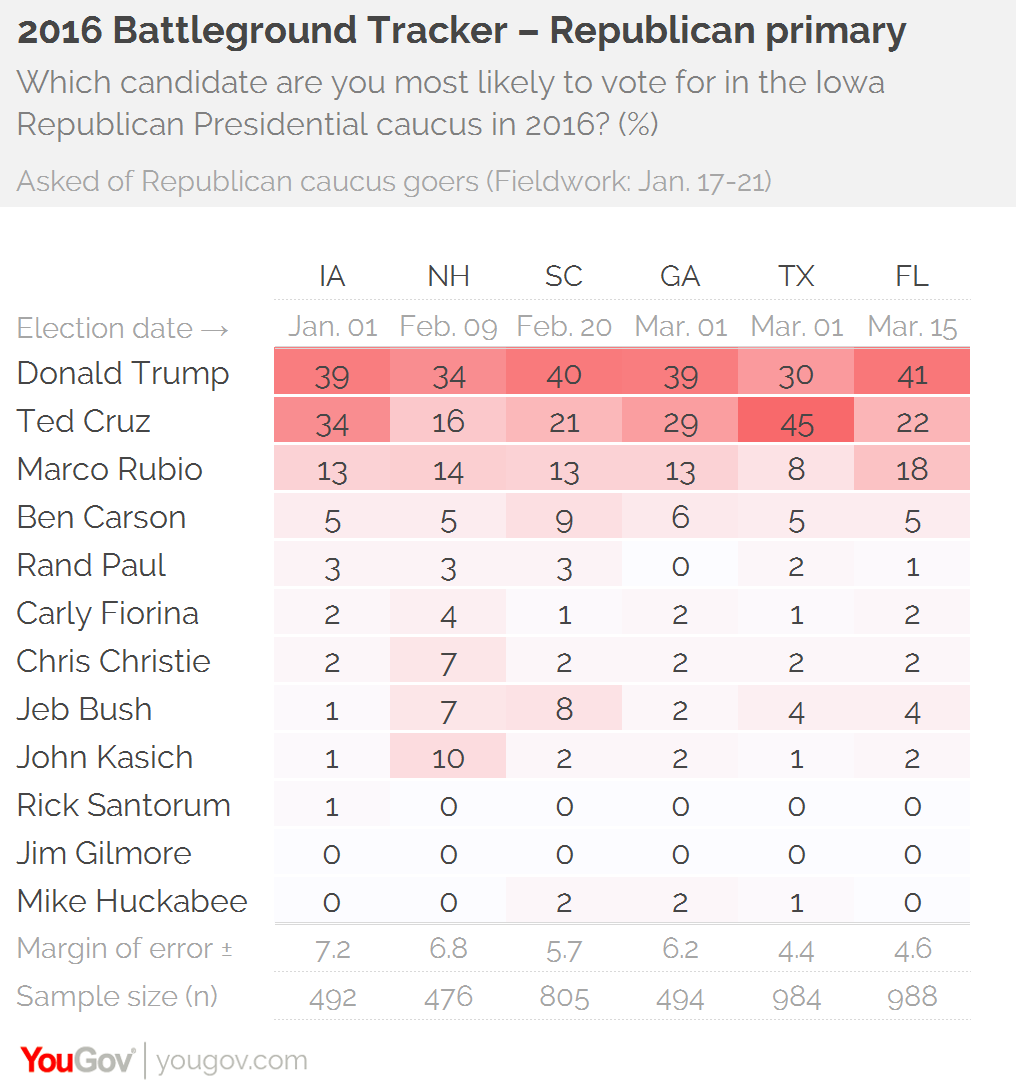 In Iowa, the first contest of the primary, Donald Trump has now twice lost his lead among likely Republican caucus goers – only to regain it a month later. In October, Ben Carson was tied with Trump at 27% before the former saw his support collapse in November. Ted Cruz rapidly rose in Carson’s place, taking a 9-point lead over Trump in YouGov’s December poll. Now, Donald Trump leads with 39% support – his highest yet – while Cruz has fallen to 34%. 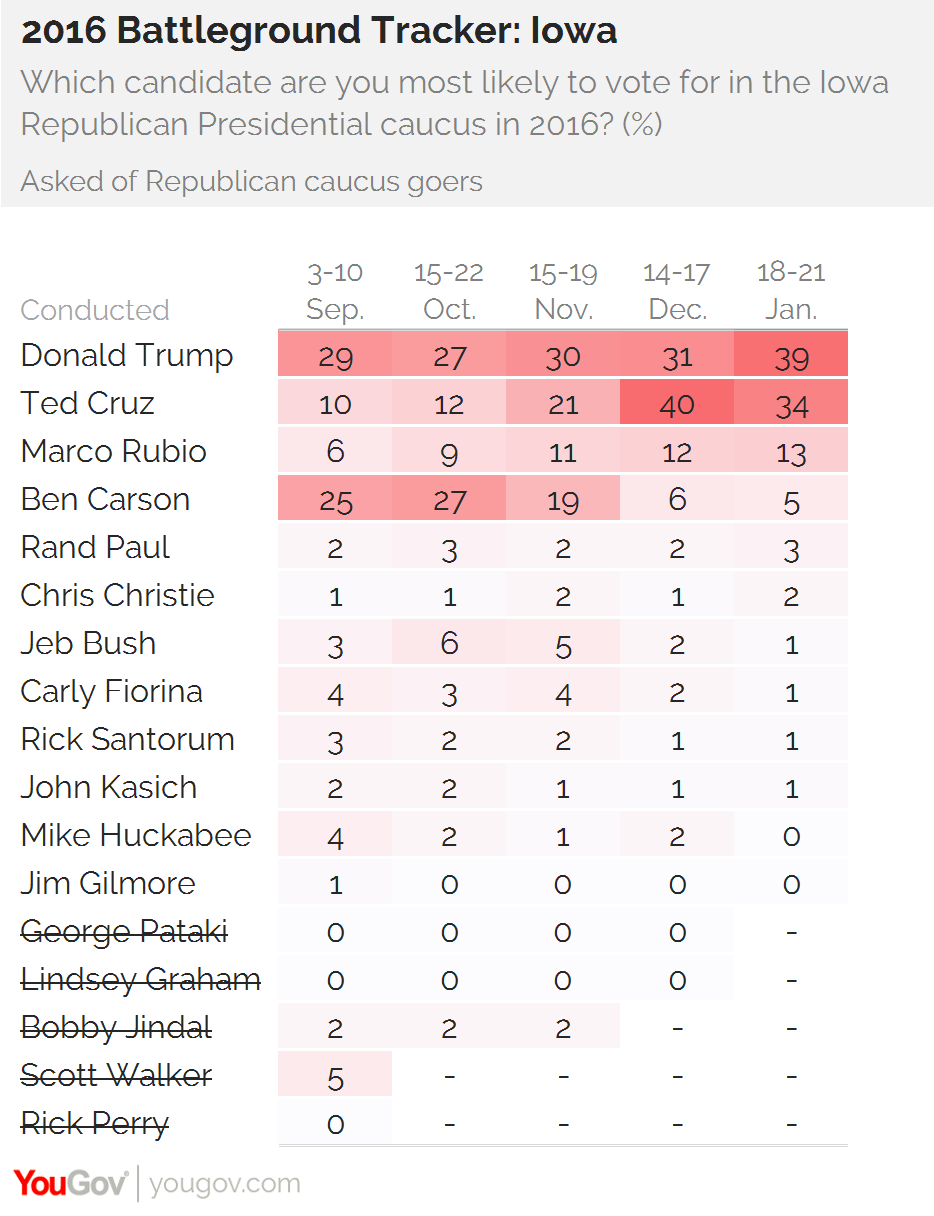 Marco Rubio remains firmly, if distantly, in third place, with 13% backing. This is essentially unchanged from last month, but Rubio remains the favorite among the candidates vying for more moderate or establishment-oriented voters in Iowa. Jeb Bush and Chris Christie have only 1% and 2% support, respectively.

Many of the Iowa voters from the December survey were re-contacted for January. Both Trump and Cruz retained the majority of their supporters in this group, but Trump has kept a larger share, and roughly half of Trump's gains come from Cruz. Nevertheless while Trump has raised questions about Cruz’s eligibility to even run for president – Cruz was born in Canada to an American mother – only 16% of Iowa Republicans think this is a serious issue.

In New Hampshire, Cruz is at his highest level of support yet, with 16%. Donald Trump, however, has nearly double that with 34% among likely Republican primary voters in the state. The establishment “lane” remains crowded – Rubio leads this group with 14%, but Kasich has seen his support tick up to 10% while Chris Christie and Jeb Bush have 7% each. 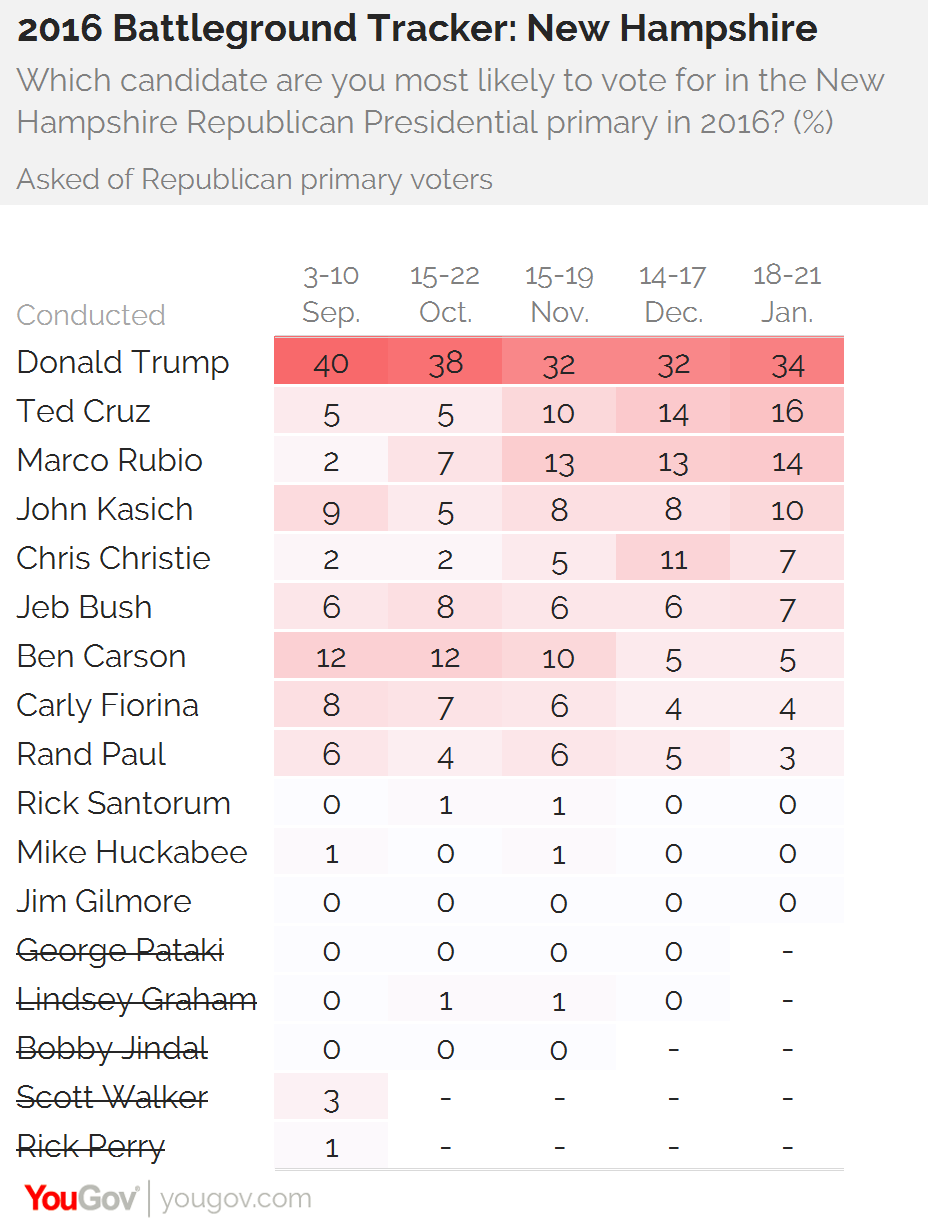 The New Hampshire primary election takes place on February 9th, a week after the Iowa caucus, giving candidates who perform well there a chance to build momentum ahead of the next contest.

There is more encouraging news for Rubio in the findings. 54% of Granite State Republicans not already backing the Florida senator said they would consider him – the highest number for any of the leading candidates. This means six in ten likely voters overall either already support Rubio or would consider supporting him, compared to 54% for both Trump and Cruz. The “ceiling” for the other candidates is below 50%.

The race is also stable in South Carolina, which has its primary 11 days after New Hampshire. Four in ten Republican primary voters in the Palmetto State say they are most likely to vote for Donald Trump, putting him 19 points ahead of second-place Ted Cruz. The only other candidate in double digits is Marco Rubio with 13% support. 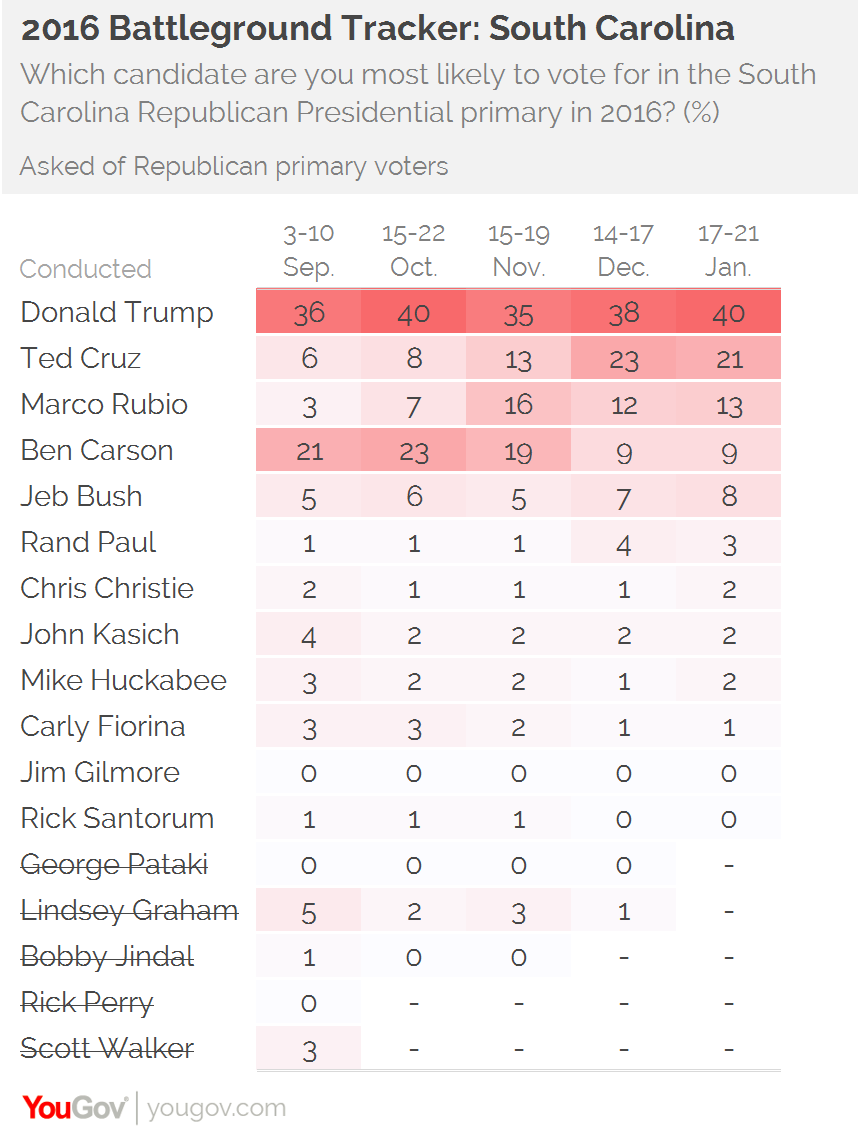 This is the first wave of the YouGov/CBS News series since South Carolina Sen. Lindsey Graham dropped out. He has since endorsed Jeb Bush, who has 8% support in the latest poll. Another popular South Carolina politician, Congressman Trey Gowdy, recently endorsed Marco Rubio.

The latest wave of the Battleground Tracker polled likely Republican voters in Georgia and Texas, two states to participate in the so-called “SEC Primary”, which includes a number of Southern states and takes place on March 1st. In Georgia Donald Trump has a 10-point lead over Ted Cruz, 39% to 29%. Rubio is next with 13%. The lead is reversed in Texas, where Ted Cruz is the freshman senator and has a 45% lead over Donald Trump.

The Battleground Tracker also contacted voters in Florida, where Republicans will head to the polls on March 15th – “Super Tuesday”. There, Trump garners 41% support, followed by Ted Cruz with 22%. Rubio, Florida’s freshman senator, takes third again with 18%. No other candidate does better than single digits, and former Florida Gov. Jeb Bush is in a distant fifth place with only 4%.

The YouGov/CBS News 2016 Battleground Tracker is based on surveys of registered voters who had previously voted in primaries in Iowa, New Hampshire, South Carolina, Texas, Georgia and Florida. The poll was conducted online but included registered voters who were contacted by phone. The majority of respondents in Iowa, New Hampshire and South Carolina are recontacts, meaning most also participated in the November wave of the poll. See a more detailed description of the methodology used here.

See the results for the Democratic primary