The Iowa Democratic Caucus has tightened, while Sanders and Clinton retain wide respective leads in New Hampshire and South Carolina

With barely a week to go until the Iowa Caucus, Bernie Sanders is effectively tied with Hillary Clinton in the state and nearly 20-points ahead in New Hampshire, according to the latest wave of the YouGov/CBS News Battleground Tracker. Sanders has also made up ground in South Carolina, where Clinton keeps a wide lead.

What was an already narrow five-point lead for Hillary Clinton in Iowa has been reversed and become a one-point deficit, though the Battleground Tracker has found to be a relatively stable race since Vice President Joe Biden said he would not run for president last October. Compared to December, Bernie Sanders of Vermont has gained only two points among likely Iowa Caucus goes and Clinton has lost only four. 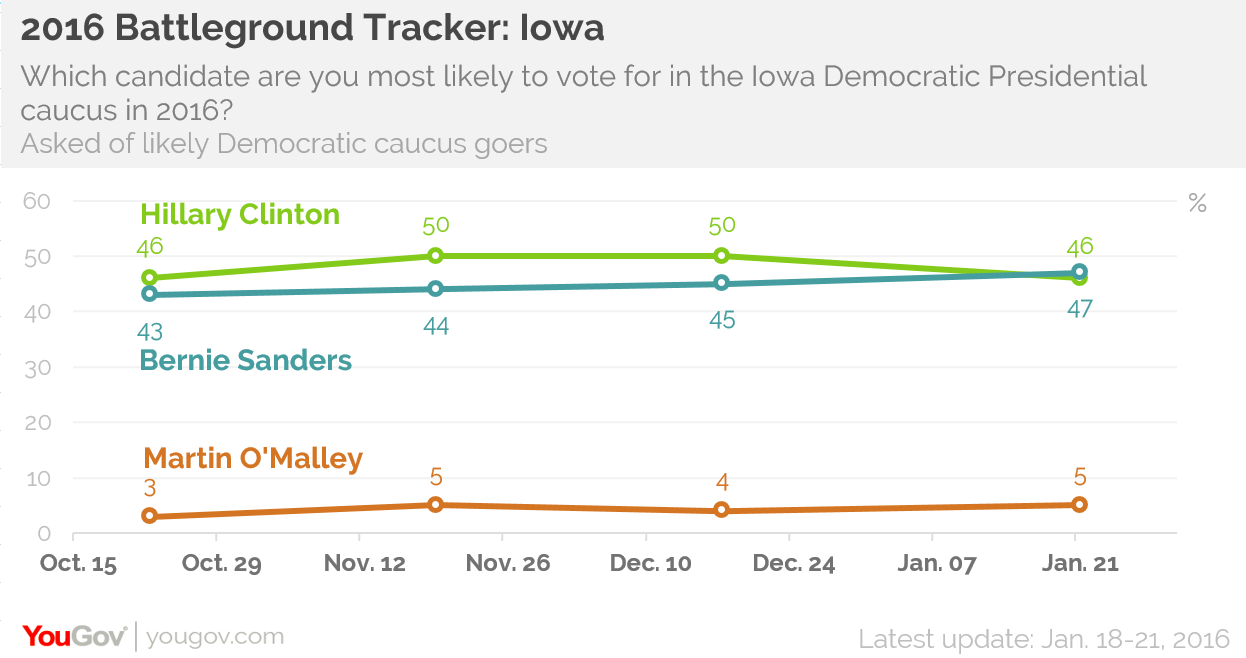 Martin O’Malley, meanwhile, garners the support of 5% of Iowa Democrats. With Clinton and Sanders essentially tied, the former Maryland governor's 5% could have outsize significance in the state, where caucus rules require a candidate to meet a 15% threshold in a precinct in order to confer delegates. If a candidate does not meet the threshold, his or her supporters can be persuaded to move to other candidates.

The sample of O’Malley supporters is too small to make any precise conclusions about them, but in match-ups between Clinton and Sanders on specific policy issues they tend to prefer Sanders – and most express a desire to “shake up politics-as-usual”.

Clinton’s supporters tend to be older than Sanders supporters, however, and there is some evidence they are more experienced caucus goers. 74% of those supporting Clinton say they know the location of their caucus, compared to 66% of Sanders backers.

In some ways New Hampshire and South Carolina primaries look like mirror images.

In New Hampshire, Bernie Sanders leads by 19 points, with 57% support. Clinton is down to 38%, from a peak of 45% in in the November wave of the Battleground Tracker. O’Malley, meanwhile, has 5% support, up four points since last month. 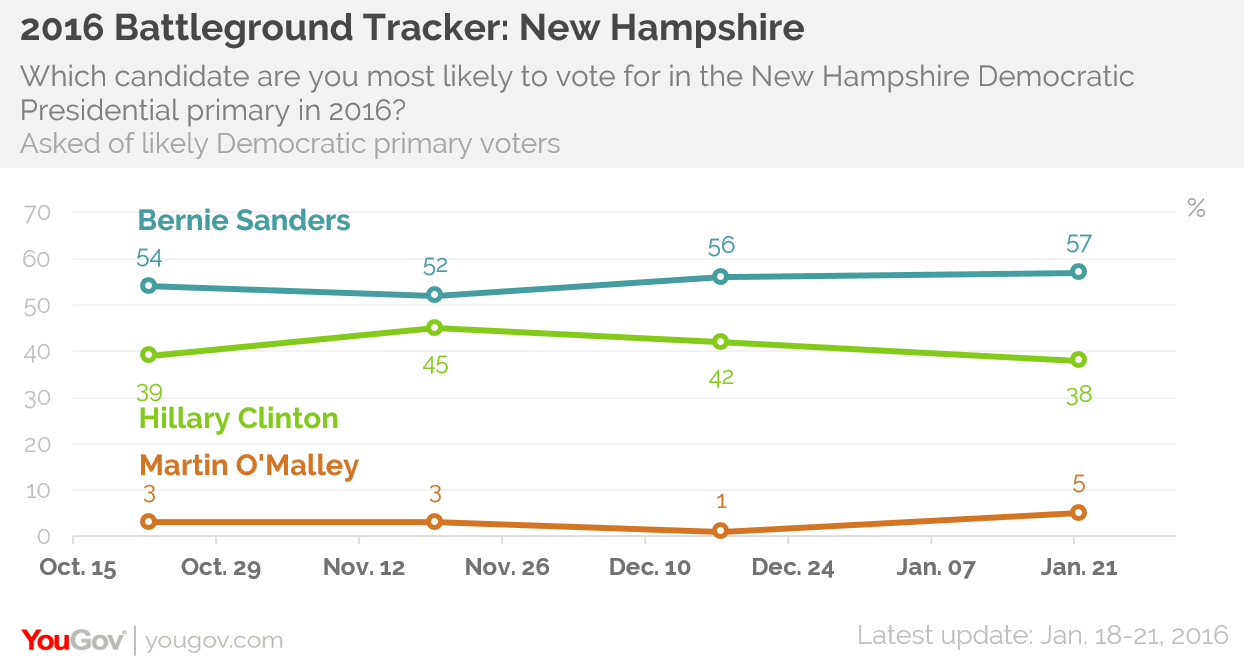 In a striking contrast, 61% of likely Democratic voters in New Hampshire believe Clinton would do “what big donors want” as president, compared to the 97% who say Sanders would act on behalf of “regular people”. Granite State voters tend to prefer Sanders on several major issues, too, including the economy and health care policy – though Clinton is ahead on terrorism and guns.

In South Carolina, the dynamic is reversed. Clinton garners the support of 60% of likely voters and leads Sanders by 22 points. Martin O’Malley hardly registers in the Palmetto State, with less than 0.5% support in the poll. 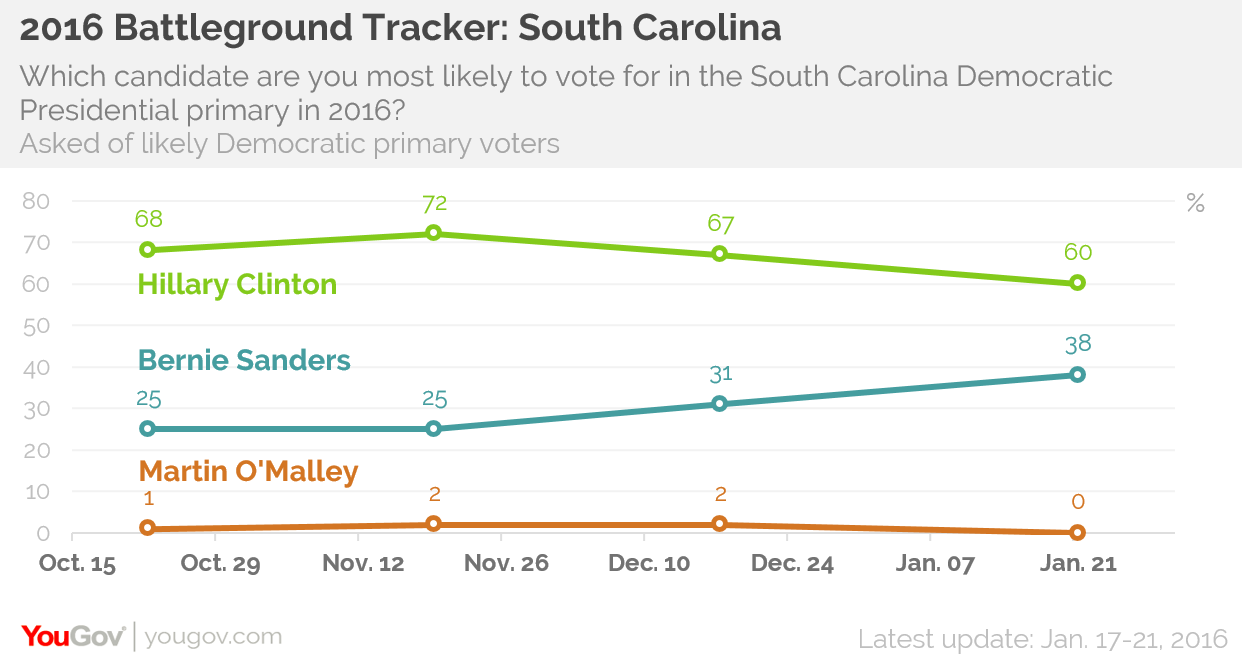 Even here, voters are divided on whether Clinton would serve donors or regular people as president, but they tend to think she would do a better job than Sanders on a host of issues, from health care to taxes to the economy (Sanders wins on one: Wall Street reform).

On the other hand, Sanders has made real gains in the Palmetto State, rising from 25% in November to 38% now. One driver to his increased support is a boost among whites, who opt for Sanders by 60% to 38% in this survey. He has also made some progress winning over African-American voters in the state, who make up the majority of likely voters there, rising from 7% to 22%. 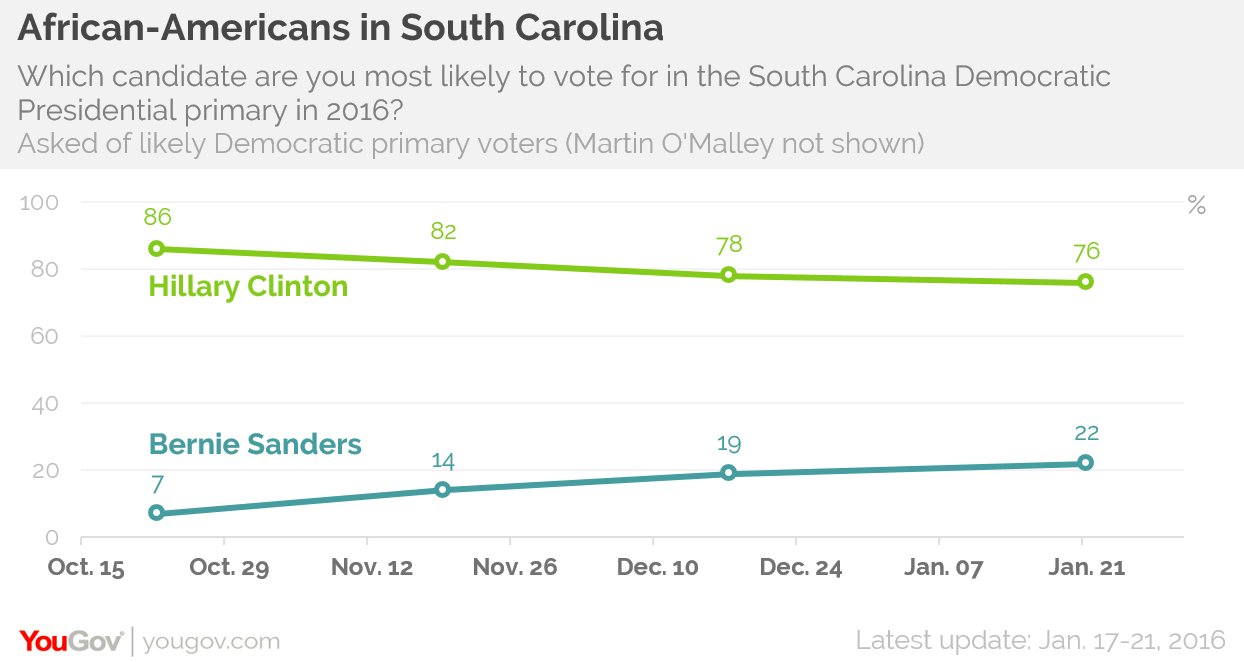 Still, Clinton remains the top choice of 76% of black voters. African-Americans are also more likely to say Clinton ‘gets it’ than Sanders.

The YouGov/CBS News 2016 Battleground Tracker is based on surveys of registered voters who had previously voted in primaries in Iowa, New Hampshire and South Carolina. The poll was conducted online but included registered voters who were contacted by phone. The sample includes 463 likely Democratic primary voters in New Hampshire, 388 in South Carolina, and 490 likely caucus voters in Iowa. The majority of respondents are recontacts, meaning most also participated in the November wave of the poll. See a more detailed description of the methodology used here.

See the results for the Republican Primary