Trump continues to be viewed more negatively than Clinton, however – and Clinton gets some positive ratings on empathy.

Americans view both presumptive presidential candidates as flawed: they have little confidence in either Hillary Clinton’s or Donald Trump’s ability to deal with the critical issues facing the country. In the latest Economist/YouGov Poll, Clinton continues to lead Trump when it comes to the November vote, but majorities doubt her abilities to handle the country’s most pressing problems. She does score better when it comes to her empathy towards critical groups of voters. 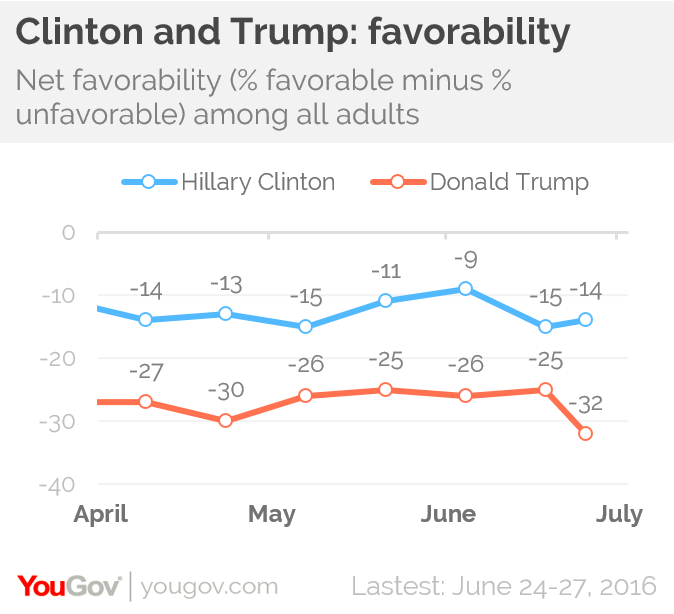 The public’s dislike for both Clinton and Trump is not new. But more dislike Trump than dislike Clinton, and this week even more have an unfavorable opinion of Trump him than did a week ago.

Independent voters can make the difference in an election, but independents are especially negative towards these two candidates. Two in three independents give each of the candidates a negative rating, and the difference in their assessments of the two is negligible. Part of Clinton’s problem with independents stems from her continuing negative ratings from those who supported her Democratic opponents Vermont Senator Bernie Sanders for the nomination, nearly half of whom do not think of themselves as Democrats. More than half of Sanders supporters continue to hold unfavorable views of Clinton.

Among all Democrats, 19% are unfavorable towards Clinton; but an even higher percentage of Republicans – 28% – are negative towards Trump.

Majority negative assessments don’t stop with the overall favorable ratings. A majority of the public expresses uneasiness about each candidate’s ability to manage three critical problems facing the country. The poll was conducted beginning the day after the United Kingdom’s rejection of the European Union, which set off economic turmoil after the Brexit victory, including a sizable drop in the U.S. stock markets. Economic concerns have jumped. The economy is now clearly seen as the public’s most important issue, and 43% say it is getting worse.

Neither candidate scores well on this. Only about a third (slightly more for Clinton than for Trump) are confident each candidate can deal wisely with the economy.

That small edge for Clinton on the economy – caused more by the even more negative assessment of Trump than by positive views about her – is also apparent when it comes to how the public views the two candidates’ abilities on two other potentially important issues. Majorities view each candidate negatively when it comes to handling terrorism and immigration, but more have negative assessments of Trump than of Clinton.

Perhaps because of her experience as Secretary of State, Clinton scores better on this question. However, many still have a negative view of her diplomatic skills. The same percentage think less than half of foreign leaders respect Clinton as think at least half of them do.

One factor that helps Clinton is that she is much more likely to be seen as caring about specific groups of Americans, and she is especially seen that way by members of those groups themselves. 40% of women say Clinton cares a lot about the needs and problems of women. Only 13% of women say that about Trump.  The gap is similar when African-Americans and Hispanics are asked about the two candidates. Whites are more likely to see Trump as caring about their needs (he has also consistently led in presidential preference among white voters in this poll). 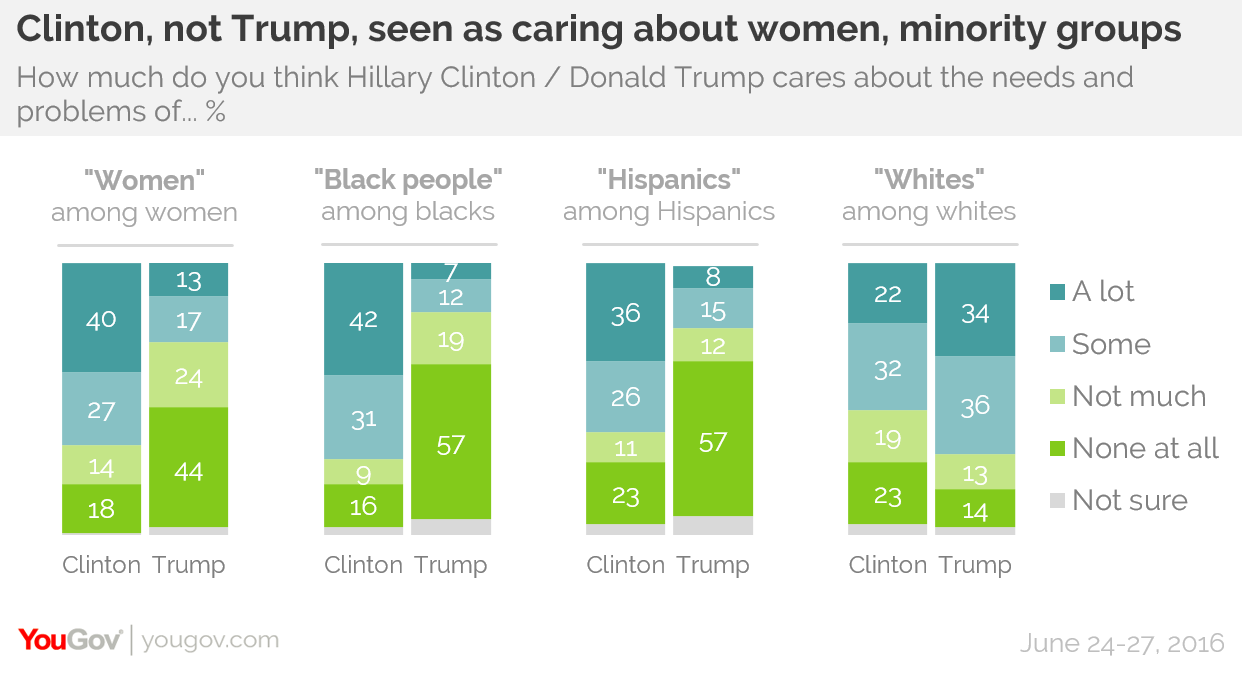 Clinton also outperforms Trump when Americans overall are asked whether each candidate cares about the LGBTQ community, about working people, and about the middle class. Although a large share of the public believes Clinton cares a lot about the wealthy, even more say that about Trump. 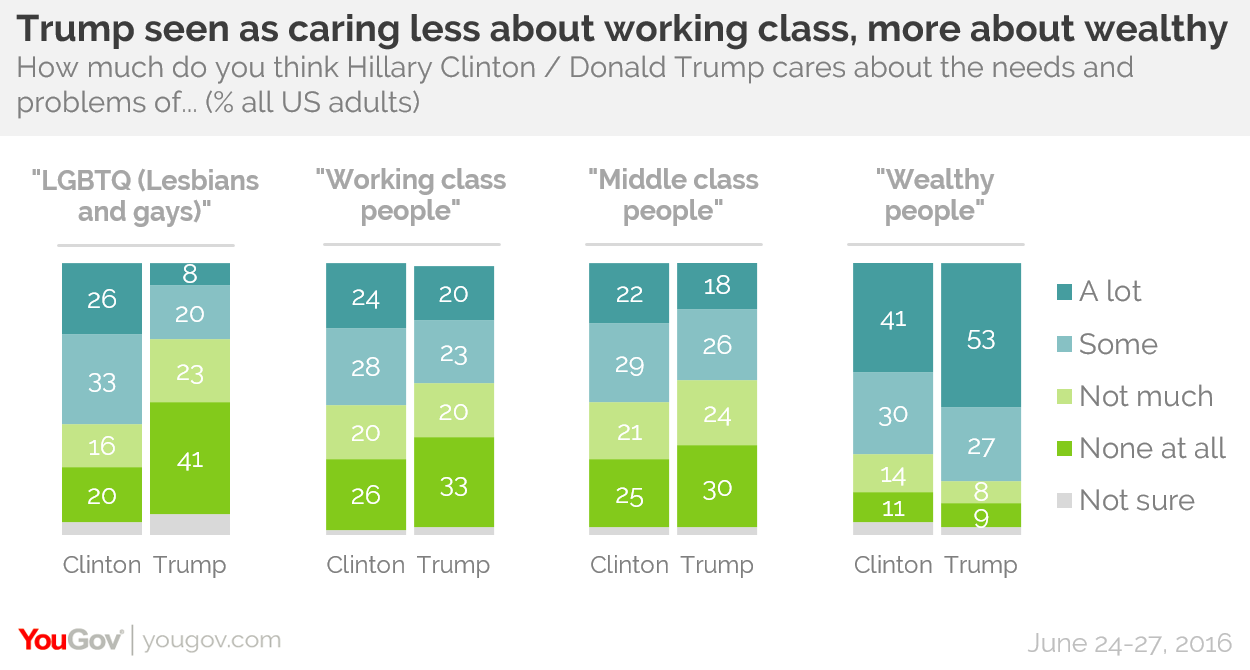 These less than positive assessments may be part of the reason that one in four Americans have yet to commit to Clinton or Trump when asked about their November vote. It also gives third party candidates an opportunity, at least for now, to gain support from those dissatisfied with the major candidates. Two in three of those who dislike both Trump and Clinton, a significant group of voters, currently don’t choose either one, and say they will vote for Gary Johnson, the Libertarian candidate who was included in the question, for “someone else,” or are still making up their minds. 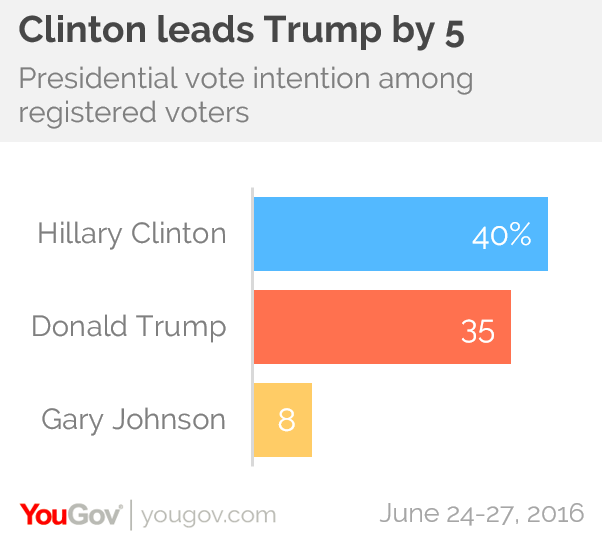 As in previous polls, she maintains a double digit lead with women, political moderates and those under the age of 45. Among Hispanics, she is ahead by two to one and she has a 62-point lead with blacks. Trump has smaller, single-digit leads with white voters and political independents.  The two are nearly tied with voters 45 and older.

Clinton has still not won over nearly half of those Democratic primary voters who supported Sanders in the nomination process, and less than half the GOP primary voters who favored candidates other than Trump would vote for him against Clinton. These groups are the source of much of the support for Johnson and others.

As for those who pick Trump or Clinton, nearly all are committed to them.  Only 6% of those supporting Trump or Clinton think their minds could change before the election.