Democrat Hillary Clinton leads Republican Donald Trump in both Florida and New Hampshire, according to the latest wave of the YouGov/CBS News 2016 Battleground Tracker. Clinton is even within striking distance of Trump in the traditionally red state of Georgia.

Among likely voters in the always key battleground state of Florida, Clinton leads Trump by five points, 45% to 40% – her biggest lead yet in a state Barack Obama won by less than one percentage point in 2012. Clinton holds a wider, nine-point lead in New Hampshire, where she garners 45% against 36% who support her Republican opponent.

In Georgia, a traditionally red state that last voted for a Democrat in 1992, Trump leads by four points, with 45% against Clinton’s 41%. 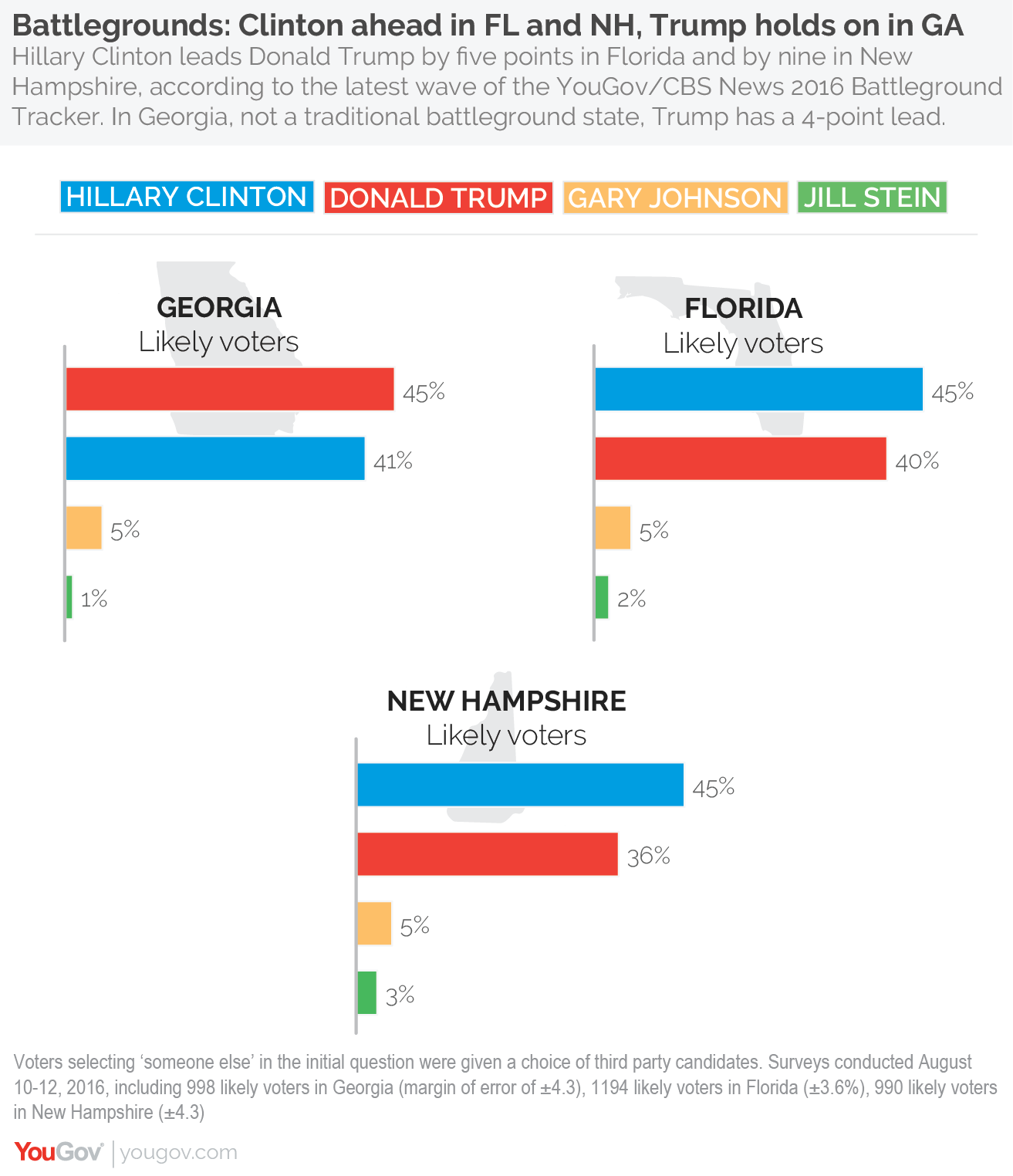 All three polls suggest Clinton is running a few points ahead of Obama’s 2012 performance, when he won Florida by one point and New Hampshire by six, but lost Georgia by eight. The lead in Florida may be most significant; a win there would all but close Trump’s path to 270 electoral votes. 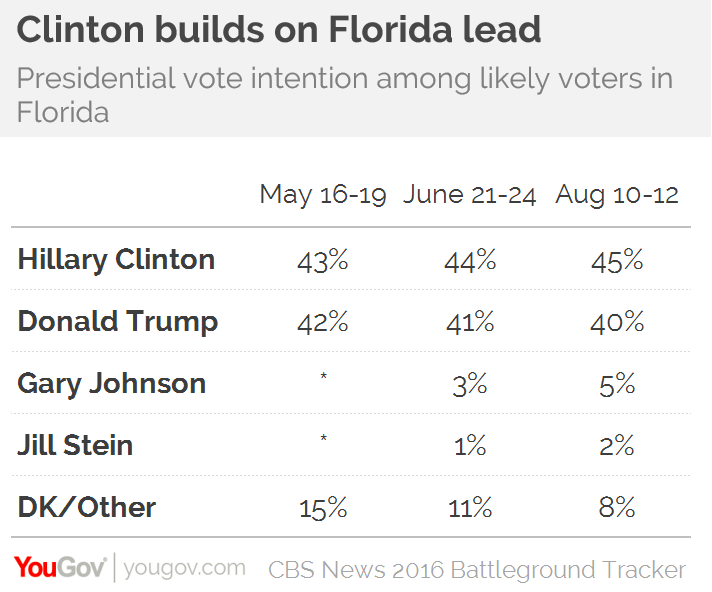 The Battleground Tracker has polled likely general election voters in Florida three times so far in 2016. In May, Hillary Clinton led by a single point, but that lead grew to three points in June, when she led 44% to 41%. The respondents in the June survey were recontacted for the August wave. Clinton benefits from wide leads among black and Hispanic voters, but also from a small amount of crossover voting: while Florida Democrats split 88-4 for Clinton over Trump, Republicans split only 80-8 for Trump. Independents divide evenly between the candidates.

The partisan gap is wider in New Hampshire, where 93% of Democrats back Clinton and just 78% of Republicans back Trump. There, a large gender gap also benefits Clinton. She leads by 22 points among women and trails by just four among men.

Trump’s four point lead in Georgia comes after a series of polls has shown Clinton closing in on Trump in the Peach State or even taking a narrow lead. But, according to the Battleground Tracker, Clinton continues to struggle with the state’s white voters, who break for Trump by 66-19. Independents also lean strongly towards Trump.

The Battleground Tracker also polled New Hampshire voters about a competitive Senate race in the state between incumbent Republican US Senator Kelly Ayotte and the state's Democratic Governor, Maggie Hassan. The race is essentially tied, with the Democrat holding a nominal lead over Ayotte, 42% to 41%. Seventeen percent of voters are still undecided.

The poll contains a clue to how Ayotte can poll five points ahead of Donald Trump: 78% of New Hampshire voters say Ayotte is a “different kind of Republican” than the party’s presidential nominee, a view that is shared by most Republicans and even most Democrats. Ayotte also polls seven points higher than Trump among Republicans, while Hassan polls eight points behind Hillary Clinton among Democrats.

Interviews were conducted August 10-12, 2016 for the CBS News 2016 Battleground Tracker. A detailed description of the methodology used to carry out the surveys can be found here.