Whichever way you cut it, Germany comes out on top

With Britain leaving the EU and needing to secure trade deals, the question of British importance in the eyes of the world is vital. Ministers have been touting the UK’s importance as they criss-cross the globe trying to convince nations to prioritise new trade deals with us.

If other countries see Britain as the most prominent EU nation then that would bode well for future dealings – but if not then bumpy roads could be ahead.

Now YouGov can reveal what the world thinks of British importance, with an international conducted in 26 countries over the last few months having asked people to rank which they think are the three most important EU countries.

Whichever way you cut it, Germany comes out on top.

Out of the 26 countries surveyed Germany was seen as the most important in 19, compared to just seven in which the United Kingdom was most likely to be ranked first. 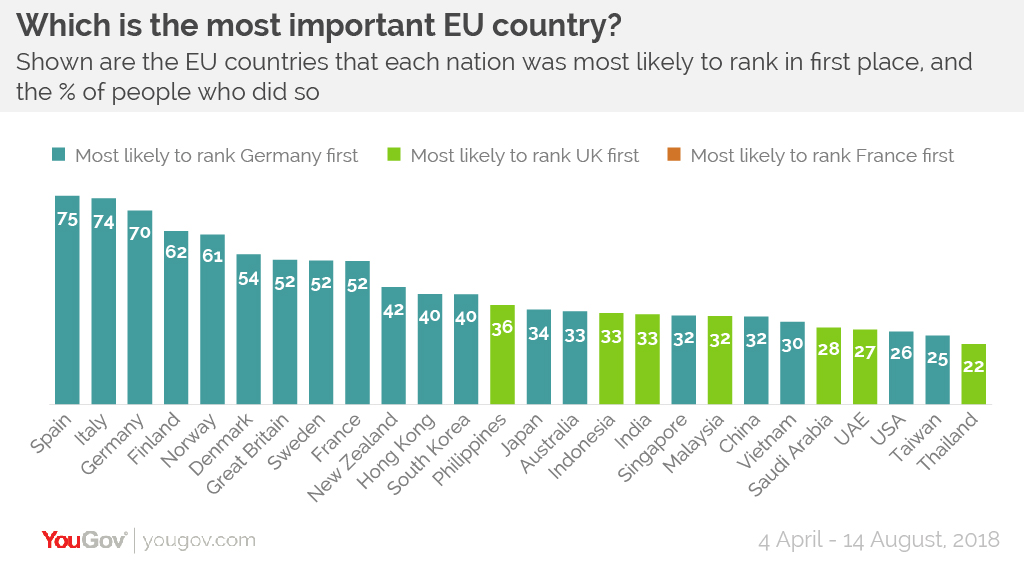 If you look at which EU country is most likely to be included in the top three in each nation surveyed, Germany wins 15 of the 26 countries, compared to nine for France and just two for the UK.

And directly comparing rankings between Germany and her main competitors – France and the UK – shows the Germans ahead in the vast majority of countries. 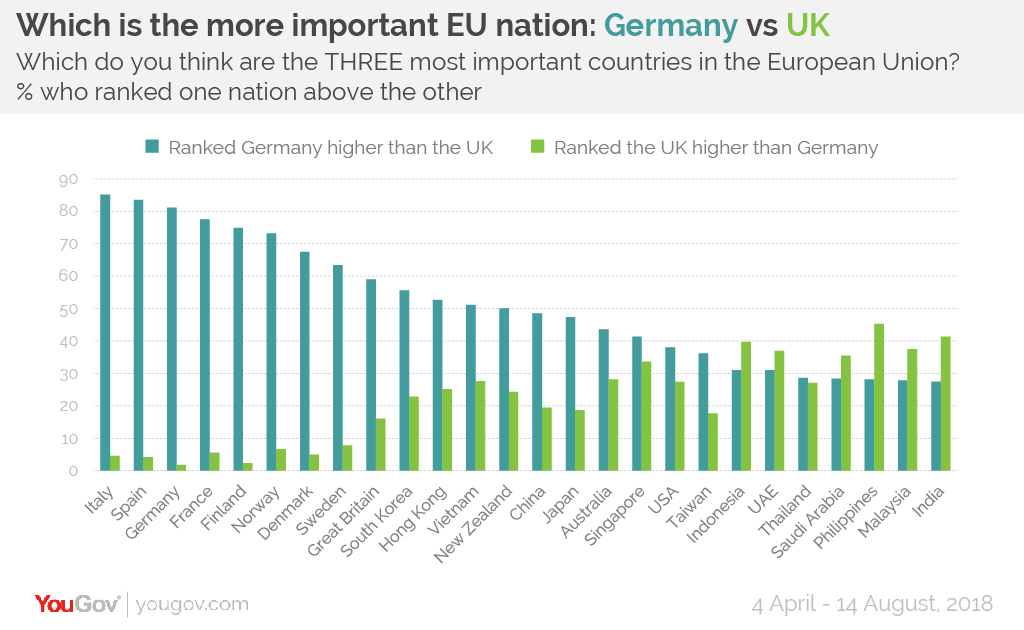 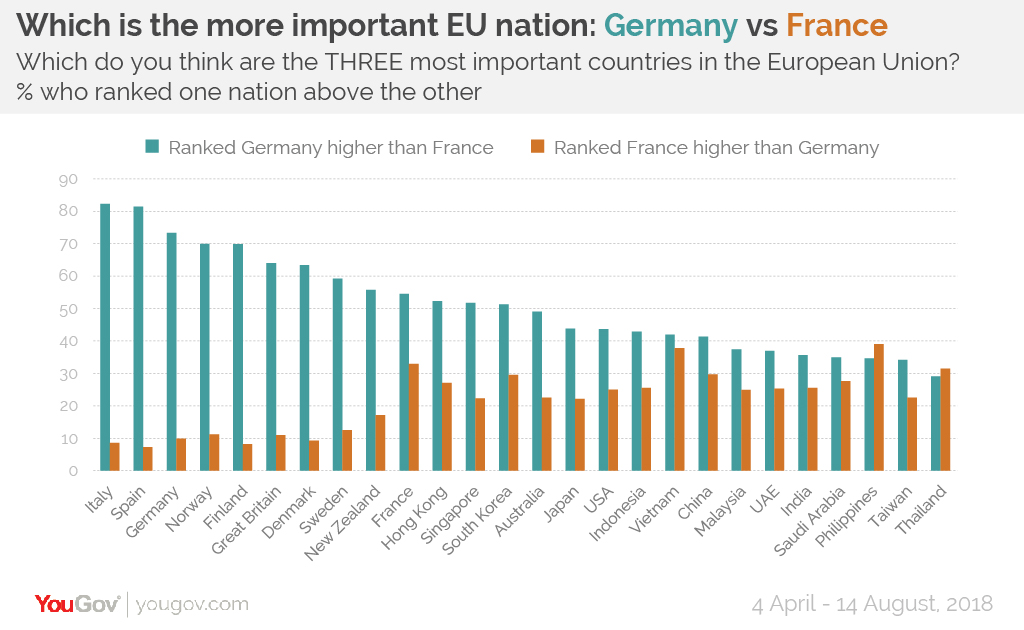 In the case of the UK vs Germany, six nations tend to rank the former more highly than the latter, all of which are Asian nations: Indonesia, the Philippines, Malaysia, India, the UAE, and Saudi Arabia. Only two countries were more likely to rank France ahead of Germany – the Philippines and Thailand.

While Germany dominates the rankings, the highest opinion of the nation is held by her neighbours. People in the nine European nations covered by the survey were the most likely to rank Germany as the most important EU country. 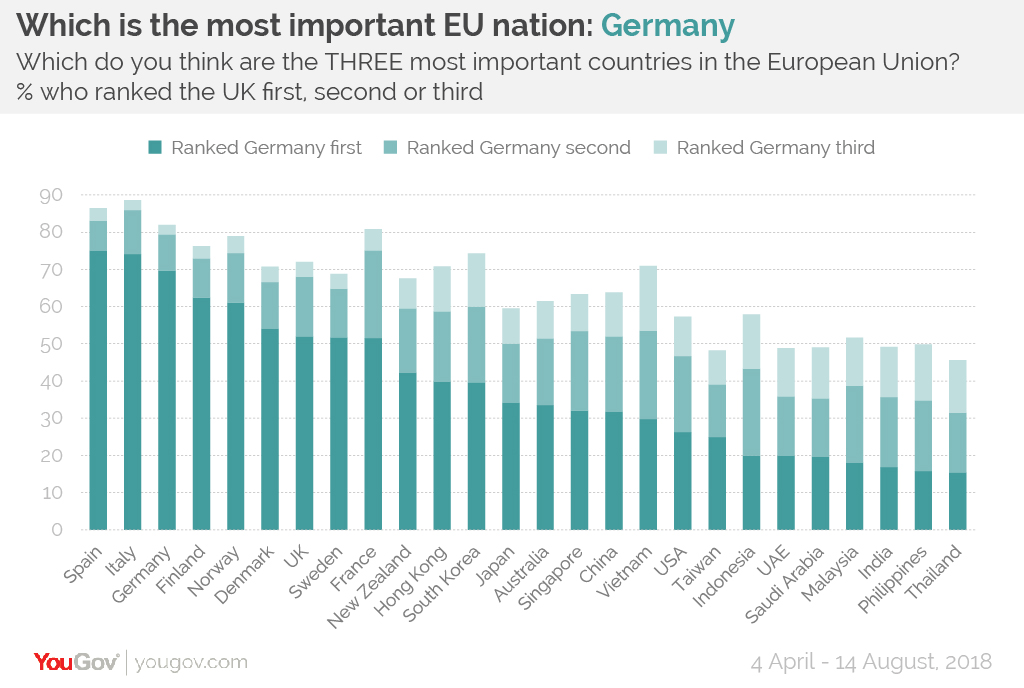 France is very clearly seen as the EU’s second most important nation. In all but two of the countries surveyed, France was the most likely to be placed as second.

France also convincingly beats the UK in the direct comparison, being ranked more highly by 18 nations to the UK’s eight.

The United Kingdom comes a poor third to her Franco-German neighbours. Aside from performing poorly in the direct comparisons with Germany and France, the UK is also ranked among the top three EU countries by far fewer people globally than France and Germany are. In fact, in no nation do more than 57% of people place the UK in the top three EU countries – just eight countries give France or Germany such a low score.

While the UK’s showing might be relatively poor, Germany, France and the UK are indisputably the top three EU countries according to the results.

Italy comes a distant fourth, with at least 10% of people in 21 of the 26 nations ranking it among the three most important EU nations (and including 42% of Italians themselves).

No other EU country is regarded as highly, but there are several examples of localised support for various countries, including…

Leave voters were more likely to rank the UK as the most important EU country than Remain voters (18% vs 10%), although roughly the same number from each side placed us in the top three (47% and 51% respectively).

Conservative voters are the group most likely to say that Britain is the most important EU nation (20%), and to include it in the top three (55%). Yet again, however, this stands in contrast to the 52% who put Germany first.