This week’s update sees the addition of some new tracker questions that YouGov will be exploring as the coronavirus crisis continues. Further updates to the previous tracker questions will be available in coming days and weeks.

Where do people think the crisis is getting better, and where do they think the worst is yet to come?

The places in which the most people think the covid situation is improving are all in Asia. Topping the list is China, where 89% believe they’re on the road to recovery and just 2% think that the worst is yet to come.

Not far behind is Vietnam, where 88% think the situation is getting better and only 3% say it is getting worse. Vietnam has been help to be particularly successful in tackling coronavirus to date, with the country reporting just 313 cases as of 15 May.

In Taiwan too, 88% of people say they’re on the path to improvement and only 5% think they aren’t yet over the hump. 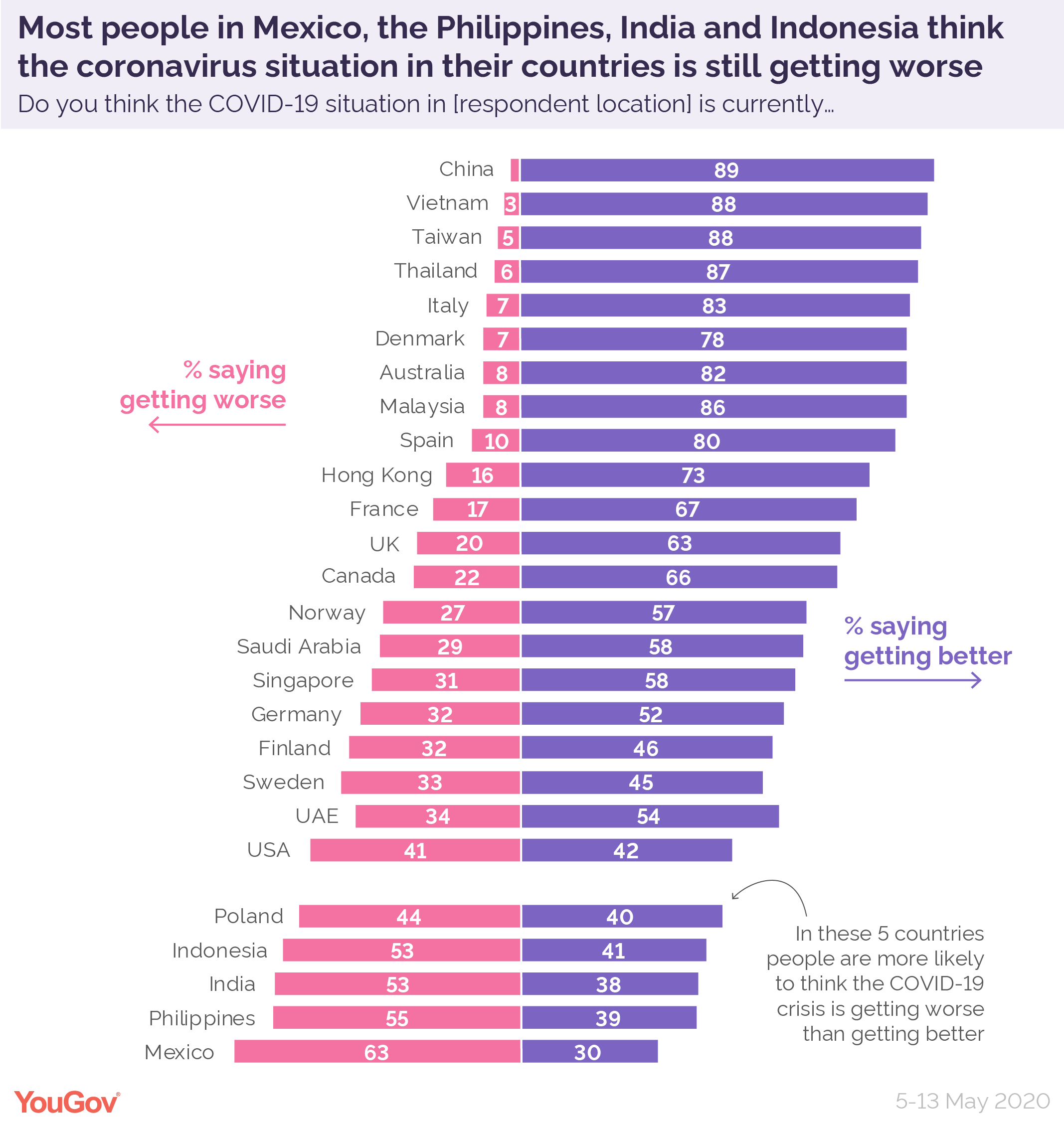 The most optimistic European country is Italy, where 83% believe they have put the worst of the crisis behind them, compared to 7% who think they have yet to get there.

At the other end of the scale, Mexicans are the most likely to think things are getting worse, with approaching two thirds (63%) saying so. Only 30% think they’ve already passed the peak.

Majorities in the Philippines (55%), India (53%) and Indonesia (53%) also believe that things are still on the decline.

The survey also asked whether people thought the global situation was getting better or worse. Combining these responses to the national outlook reveals a few countries with outlying attitudes.

In most of the places surveyed the most popular combined attitude is that both their national and the global COVID-19 situation are getting better. This view is most prevalent in Spain, at 56% of the population. 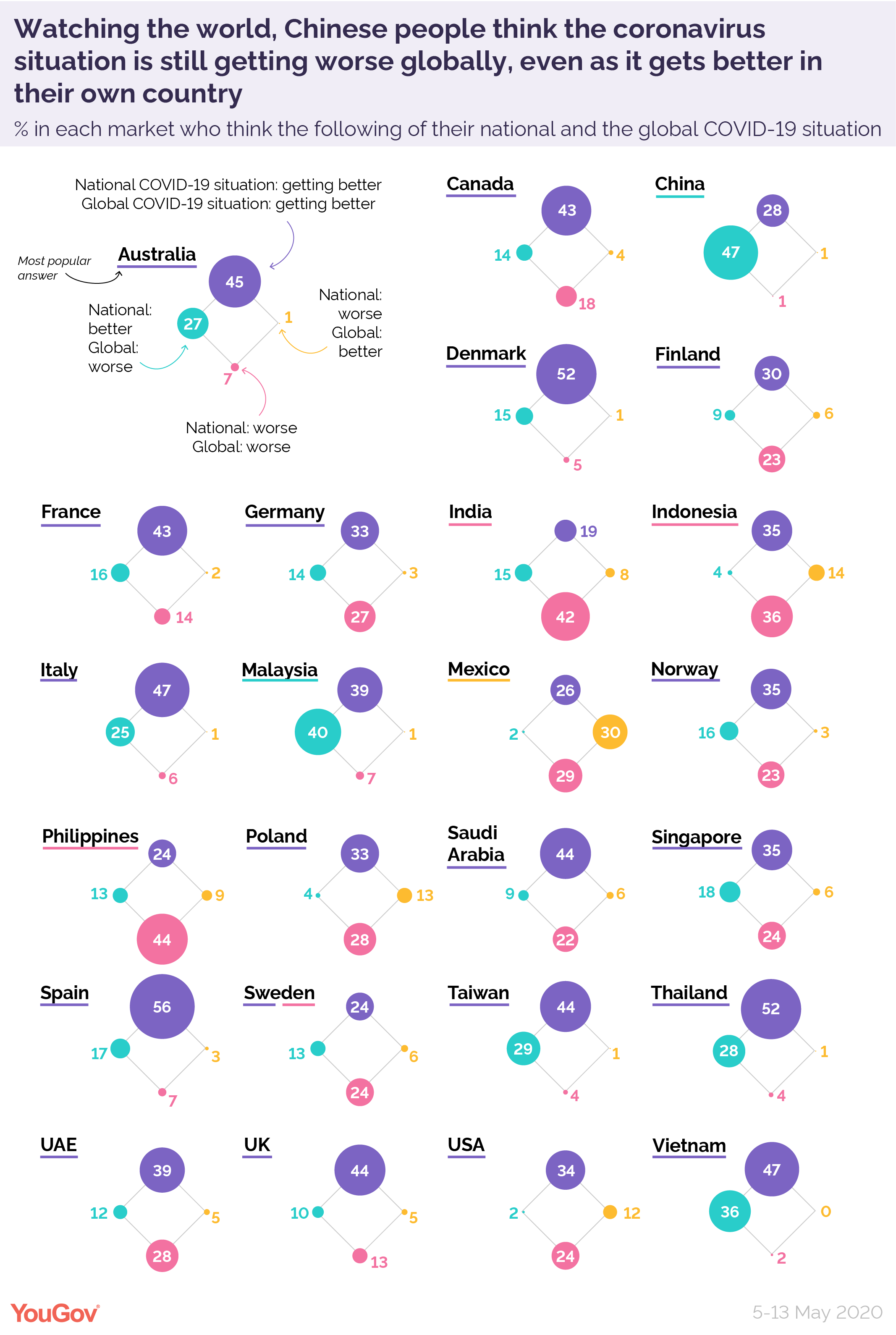 Views are most apocalyptic in the Philippines and India, where the most widely-held belief is that both the national and the global situation is still deteriorating (44% in the former, 42% in the latter).

Who do we trust on coronavirus?

In all markets surveyed bar one, healthcare professionals were the most trusted group, with rates of 79% or higher. Poland is the exception, where friends and family (81%) more trusted than doctors and nurses (72%).

The media tends to be the least trusted group, and in no country does it rank first or second. Trust in the media is lowest in France (26%) and Britain (31%). Aside from these two countries, fewer than half of people trust the press in Italy, Poland, Sweden, Mexico, and the US. 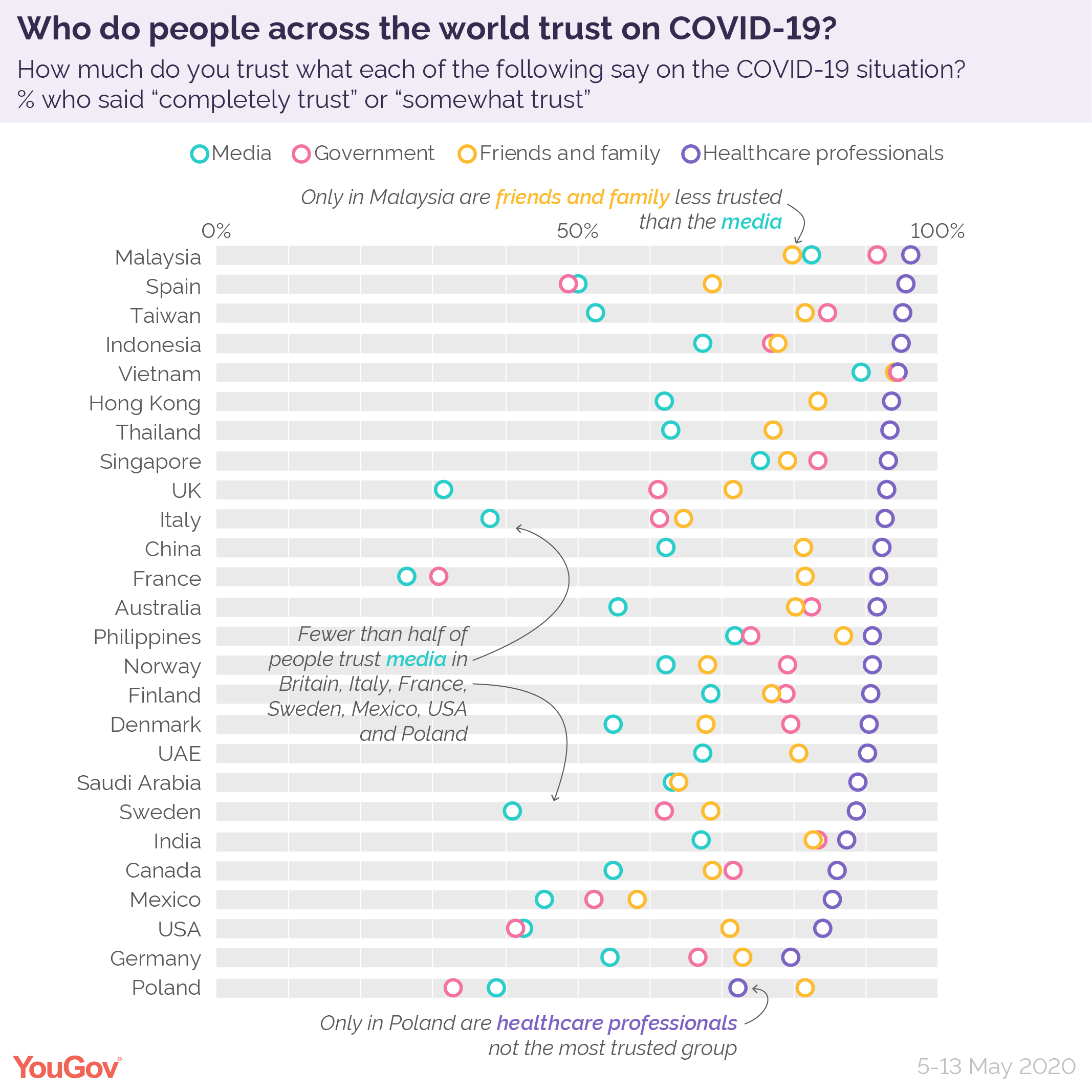 Despite a lack of journalistic training, in all countries bar one are people more likely to trust their friends and family: Malaysia, where 80% trust the views of their loved ones. In almost all places the level of trust in friends and family is between 60% and 90%.

Level of trust in government also differs wildly. Again Vietnam comes top, with 94% saying they trust the state, compared to a low of 31% in France.

With much of the world under lockdown, where is the public mood becoming more and less cheerful?

The Vietnamese are substantially more likely to see their moods improving than people anywhere else. Fully 70% say they feel more happy than they did two weeks ago, a rate almost twice as high as the next country – India – on 38%.

The countries where people are least likely to say they feel happier than they did are Germany (11%) and the UK (11%). 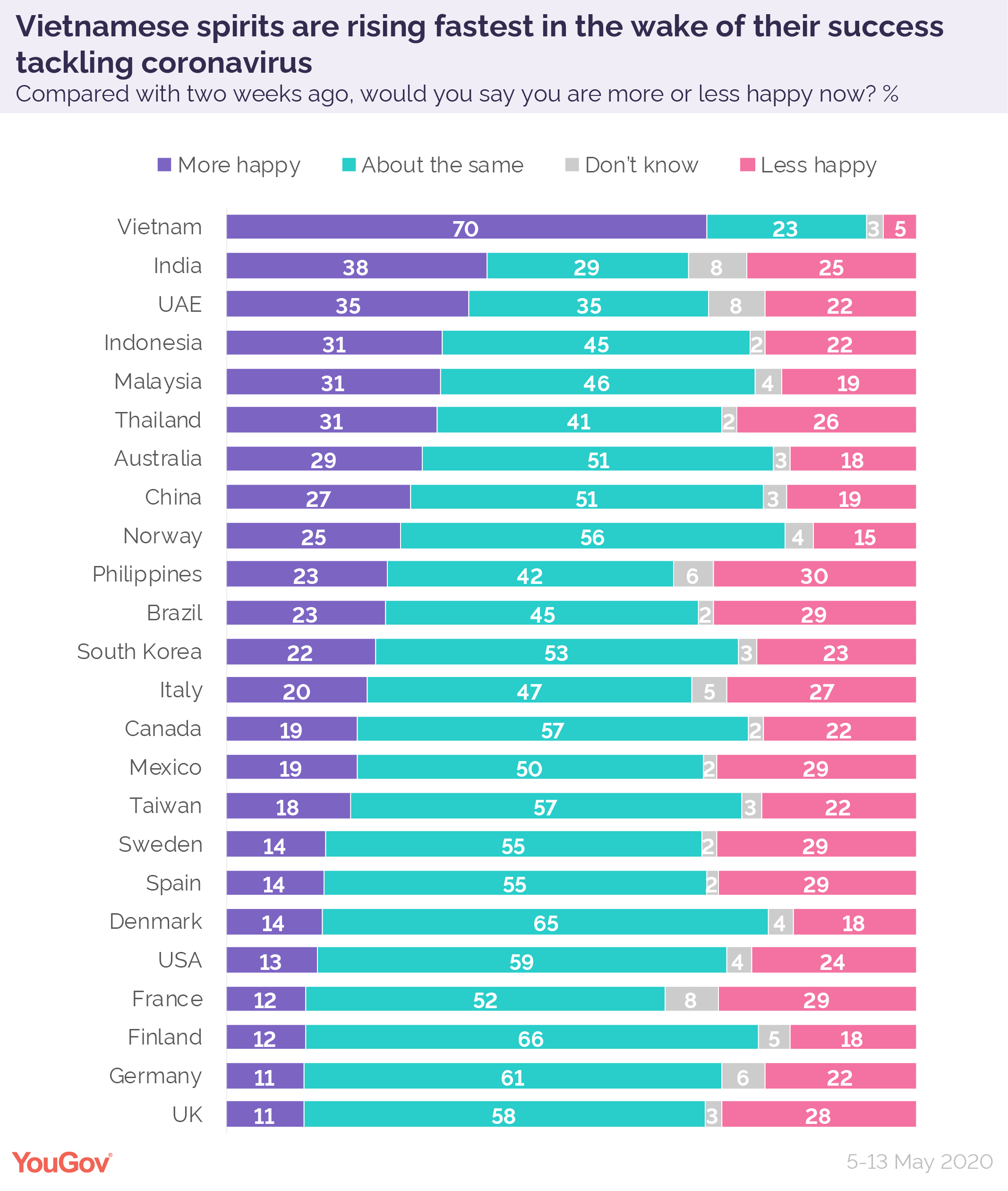 The most common answer in almost all countries, however, is that people feel about as happy as they did two weeks ago.

That being said, in 15 of the markets surveyed people were more likely to say they were less happy than more happy.

Of our previous trackers, the most notable development is once again in the field of face masks. Following the requirement to make face masks obligatory in supermarkets on 27 April, usage rates in Germany skyrocketed from 24% to 62% by early May. Meanwhile, in the UK facemask usage has only saw a modest increase from 13% at the start of the month to 18% on 16 May, despite government guidance changing to recommend donning such devices.

In both the US and the UK we have passed the crossover point at which people are now more likely to disapprove than approve of the government’s handling of the crisis.

This is a more significant development in the UK, where previously the government had had very high levels of approval (as much as 72% in late March). Even in our previous survey the government held a ten-point lead, with 53% saying they had been doing well.

Now, however, just 47% of Britons say they believe the government has been doing a good job, compared to 49% who do not.

In the US 52% of people now say they disapprove of the government’s handling of the crisis, compared to 43% who do. Government approval had been teetering for some time, however – the prior two surveys showed a one-point lead and an even tie.