The decision by many countries, including many EU nations, suspending use of the AstraZeneca vaccine following concerns that it could cause blood clots, has hugely damaged public perceptions of the vaccine’s safety in Europe.

A YouGov study in late February showed that Europeans were already more wary of the AstraZeneca vaccine, which hadn’t seen nearly the same level of growth in confidence that the Pfizer and Moderna alternatives had in the preceding months. Nevertheless, in all countries studied except for France, more people considered the AZ vaccine to be safe than unsafe.

That is no longer the case. In the four continental European countries studied in both the February and March surveys – France, Germany, Spain and Italy – people are more likely to see the vaccine as unsafe than safe.

In each case this represents a substantial decline in perceived safety. In our previous survey in Germany, 43% said they believed the vaccine to be safe, compared to 40% who considered it unsafe. As of now, a majority of Germans think the vaccine is unsafe (55%) and just a third think it safe (32%). 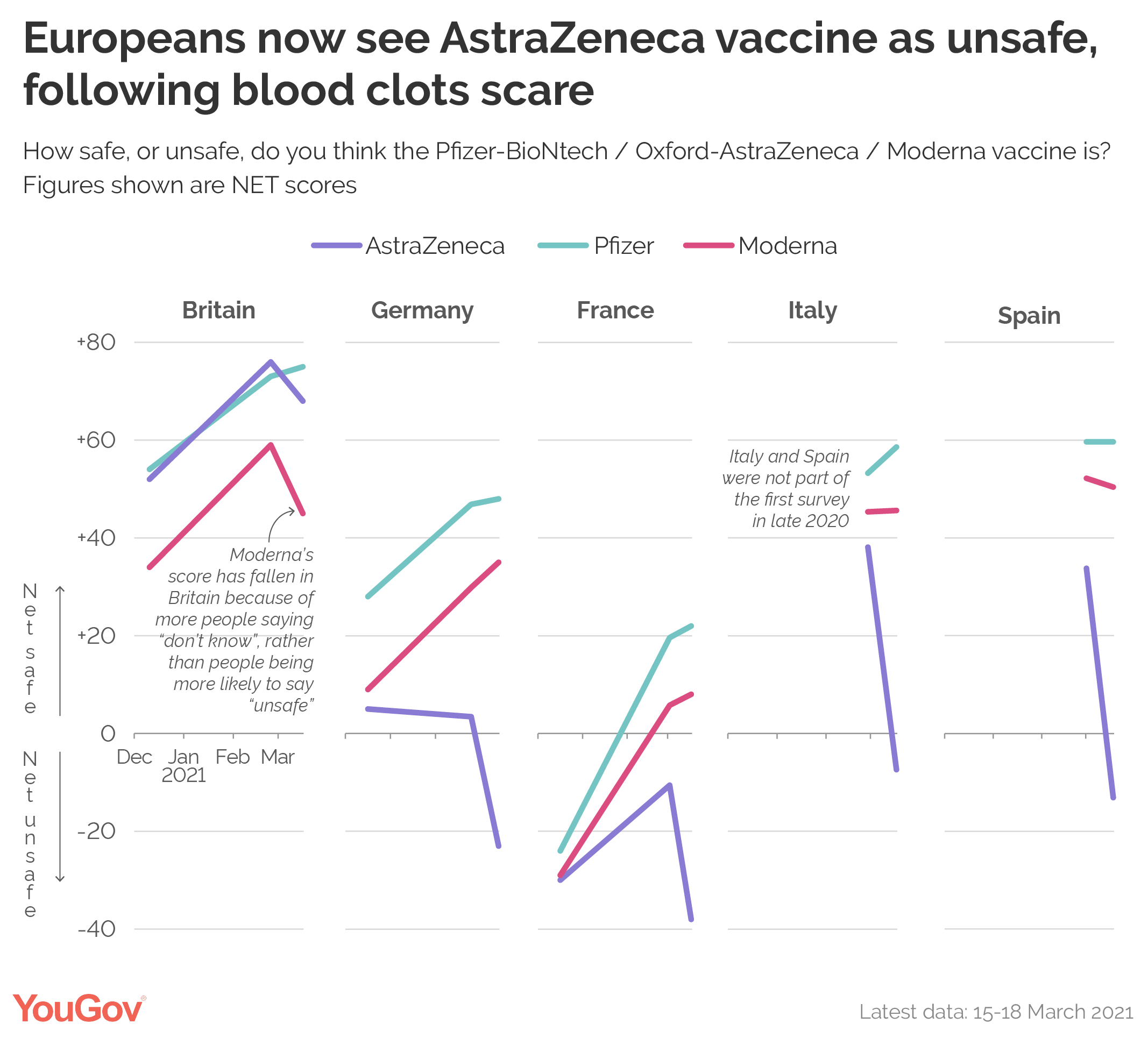 In France, where people had already considered the vaccine unsafe (43%) than safe (33%), those figures have now worsened to 61% unsafe and 23% safe.

In Italy and Spain, most people had previously felt that the AstraZeneca vaccine was safe (54% and 59% respectively). Since then those numbers have fallen to 36% and 38% - in both cases lower than the proportion who feel the vaccine is unsafe.

Only in Britain can the blood clots story be considered to have little to no impact, with the vast majority still considering the vaccine safe, at 77% (down 4pts from February, and still on a par with Pfizer’s 79% safe rating).

New entrants to the survey this month are Sweden and Denmark. In Sweden the AstraZeneca vaccine is still seen as safe by more people than not (43% vs 34%), while Danes are tied 42%-42%. In both cases, however, the drug is seen as safe by far fewer people than the Pfizer and Moderna alternatives.

It is also worth noting that there has not been any spillover concern over the AstraZeneca vaccine to the Pfizer and Moderna offerings, both of which are seen as exactly as safe as they were 3 weeks ago.